During the early part of the 20th century in Texas and throughout of the southwest the Angus breed had a reputation – a bad reputation.

Based on mismanagement of early herds brought into the state from the north, the reputation was unjust. It is common knowledge that the Angus breed did not always enjoy the popularity in the state that it does today. In fact, there were so few Angus breeders in Texas during that period; there was no need for a Texas Aberdeen Angus Association until 1936. Sometime in the late 1930s, Texas cattle breeder Luther McClung of Saginaw was experiencing udder and eye problems with his Hereford cattle, so he decided to buy some Angus cattle and see for himself what the breed would do.

Sometime about 1940, at his farm just north of Fort Worth, McClung put his 4M brand on the first Angus cattle he bred. The 4M brand, representing the four members of his family – himself, his wife Evelyn, and daughters, Lucian and Barbara – was as new as the breed he was branding. He had high hopes for the future of both.

As time passed, McClung found the Angus breed to be a thrifty, hardy breed that did not experience calving problems, was fertile, and was versatile when crossed with most other breeds. Within his herd he initiated a progressive breeding program that over the years resulted in a high producing herd that supplied seed stock to breeders in the Southwest and to many of the top herds throughout the country.

In 1945, McClung added another ranch to his operation by buying about 4,200 acres near Kiowa, Okla. In the early 1950s, however, the encroachment of Fort Worth forced McClung into selling the original farm at Saginaw. Today, Interstate 35 goes through the farm acreage with Fossil Creek Golf Course occupying part of the site. The old native stone barn in which the McClung cattle auctions were held was kept intact for use as an information center by the golf course.

The 4M Angus herd was completely dispersed in 1953. About a year later, McClung bought a 3,000-acre ranch at Rising Star, Texas with new cattle brought in, and the operation was in business once again. The Rising Star ranch was managed for many years by William Wells, husband of Barbara, Luther's second daughter.

On July 26, 1973, in a Texas Livestock Weekly article about the Rising Star Ranch, McClung described some of the ranch land as old sand fields that had been worn out by conventional row-cropping since the 1870s.The article said he used progressive methods to turn about half the 3,000 acres of sandy land into improved dry land pastures of coastal Bermuda, weeping love grass, Ermelo love grass and Klein grass. McClung was recognized as one of the first ranchers to plant love grass in the area, having done so about 15years prior to the article's publication. His intentions were to make the place carry 400 cows, year-round. According to the article, he believed that better grass produced better cattle, and along those same lines, he believed that he could take care of most of his herd's winter protein needs by putting a lot of fertilizer on the coastal Bermuda hay crop in the summer. He was quoted as saying, "Fertilizer is a considerably cheaper protein source than cottonseed cake."

About 1976, McClung retired from the oil business and moved to the Rising Star Ranch to work full-time with his cattle herd. Ten years later, at the time of his death, the two ranches were running a total of about 900 head. After his death, the ranch properties were incorporated into a trust for Lucian and her sister, Barbara, with Murl Richardson, Lucian's husband, acting as administrator and trustee.

At the time of McClung's death, Murl and Lucian took over management of the Rising Star and Oklahoma ranches. The day to day operations of the Oklahoma Ranch was managed by R. W. Sartor until the ranch was sold in 1996. The day to day operations of the Rising Star Ranch were managed by Phil Donaldson until 1993 and since then the ranch has been under the management of Howard Lawrence.

Murl's job of taking over the McClung operation was helped by the fact that he had always worked at the ranches with his father-in-law after his marriage to Lucian in 1951. ''We worked well together," Murl says, "I had worked all of my life in the production of equipment for oil wells, first in my own company, then at Oil States Rubber Company, later for LTV as vice president and general manager of production and as I continue today with my interests in the oil & gas industry".

Murl has changed a few management practices and continually tries to upgrade the herd. Since he firmly believes in using Expected Progeny Differences (EPDs) and participating in the Angus Herd Improvement Records (AHIR), all breeding information on the herd is electronically saved giving easy access to all cattle records.

"In years past, without EPDs, it is hard to comprehend how ranchers were as successful as they were in their breeding programs," Murl says. "Since all of our registered cows are bred by artificial insemination, we pay particular attention to EPDs and the National Sire Evaluation, which to us is a major tool in determining what bloodlines to use. We study the cow for her structural soundness and performance and from there; we choose a sire based on EPDs to blend with the attributes of the cow.

The breeding of heifers is another area where Murl takes particular care. All heifers, are bred AI to low birth weight bulls. Nutritional levels are kept high for the first calf heifers, watching the cattle carefully to make sure they don't get too fat. They are bred to start calving in January, with the cows beginning in February. Since the cattle are heat synchronized in groups, calving is fast and usually done by April. After calving is finished, the heifers and young cows are kept together and older cows, whose body condition are more difficult to maintain, are separated.

Back in the late 1940s and early 1950s the operation held an annual production auction at the ranch to market their cattle, but Murl doesn't see returning to that type of marketing in the foreseeable future. Instead, he favors the private treaty method of selling 4M cattle. The top bulls are sold to registered breeders with the remainder of the bulls being sold to commercial breeders. Heifers not retained for heard growth are sold private treaty and occasionally, some cattle will be sold through a consignment sale.

For the family the ranch has always been a welcomed respite from other obligations. Murl's and Lucian's children, Murl Jr., Barbie and Amy all grew up playing, hunting, fishing and working at the ranch. Marriage and kids for their children brought grandkids who all have shared in the ranch experience as they grew up and now with two great grandkids on the ground and another on the way all following in the family footsteps.

Lucian says, "Murl's job of caring for the ranch is a labor of love, and she is understandably proud of the job he has done. My father was successful in just about every venture he undertook. We are just trying the best we know to carry on what he started and do what he intended. He always told Murl what he wanted done after his death, and the main thing was, he didn't want the ranch to be sold. He wanted it to carry down through his grandkids." More than 75 years after Luther McClung put 4M on the first Angus calf, the brand is still being used on Angus cattle bred at Richardson McClung Ranch. 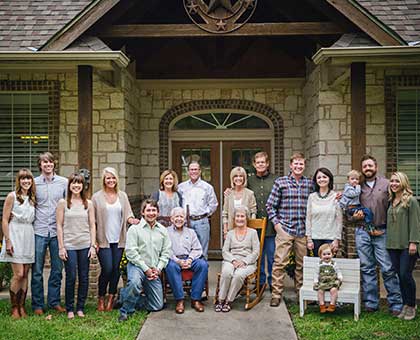 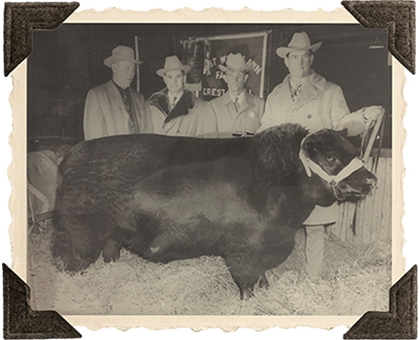 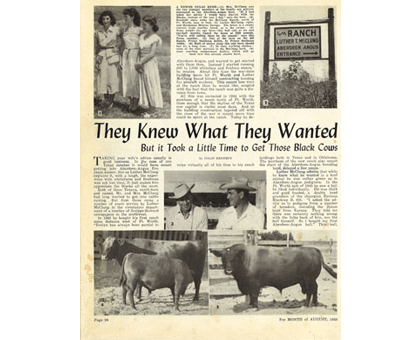 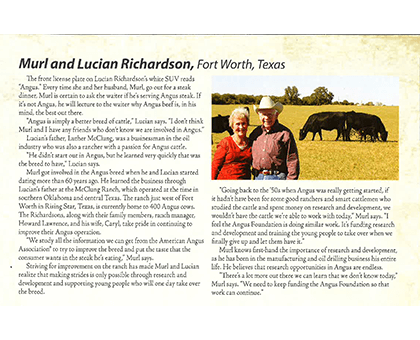 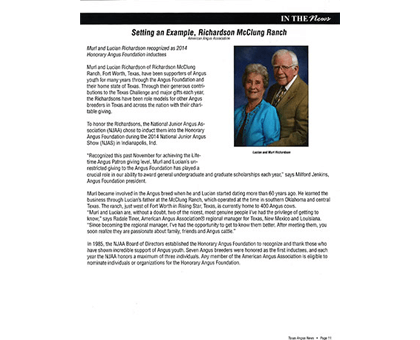 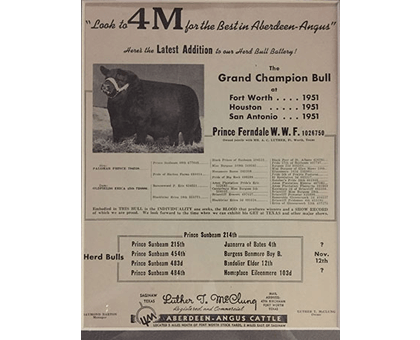 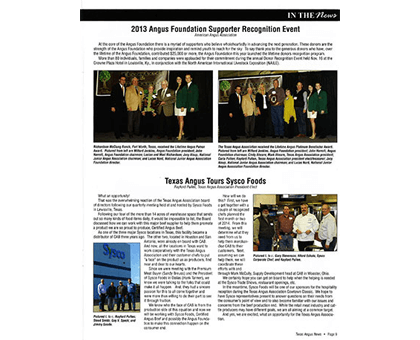 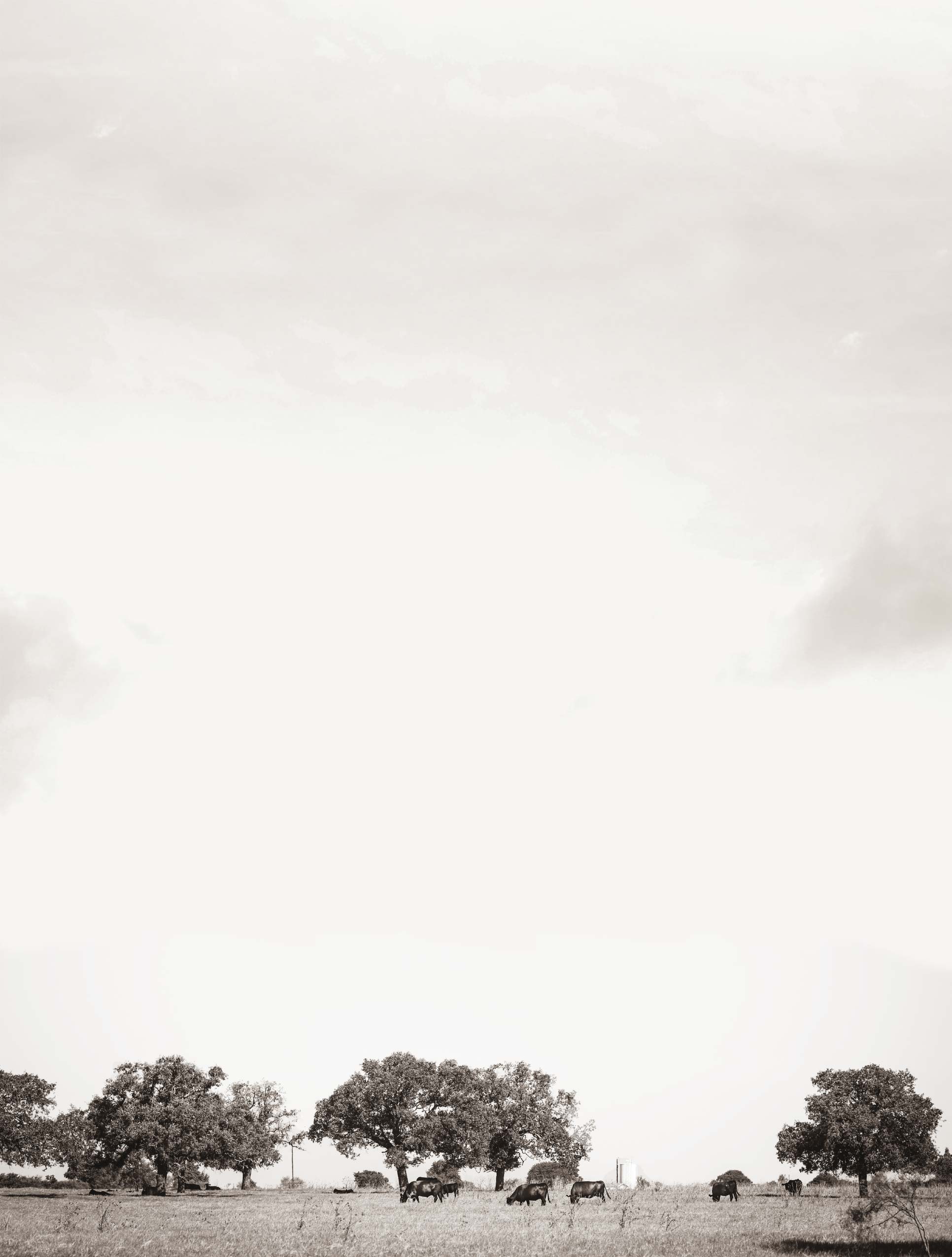 My father was successful in just about every venture he undertook. We are just trying the best we know to carry on what he started and do what he intended.

More than 75 years after Luther McClung put 4M on the first Angus calf, the brand is still being used on Angus cattle bred at Richardson McClung Ranch.

RM4M bulls fulfilled a variety of Rancher Needs across all budgets at the 47th Annual R.A. Brown Ranch Bull Sale on October 13th in Throckmorton, TX. 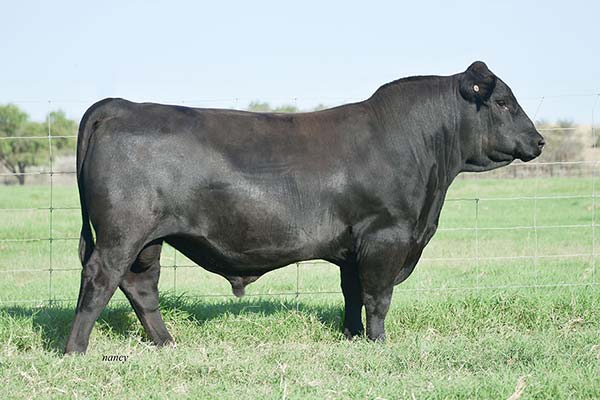 Richardson McClung Ranch combines with R.A. Brown Ranch for roughly 2 centuries of supplying bulls to Texas Ranchers. We are proud to be part of the R.A. Brown Ranch team and sell bulls through one of the elite seedstock operations in the country. This relationship provides access to vital phenotypic data collection such as Feed Efficiency and independent third party foot and docility scoring. It also allows us to participate in the $Profit suite of economic selection indices. 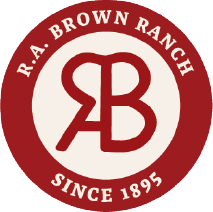 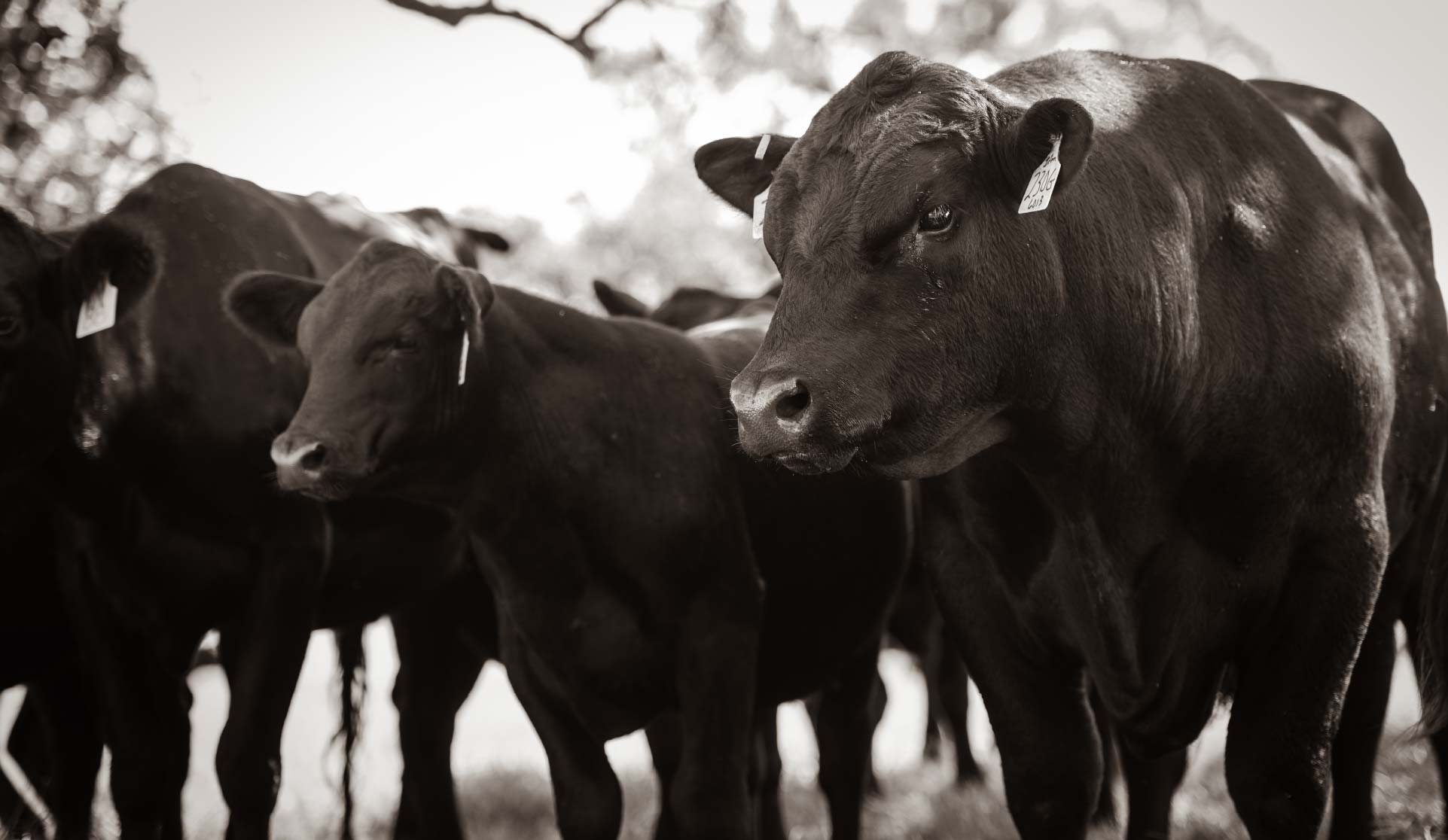 Howard grew up a couple of miles from Richardson McClung Ranch. He started working for Richardson McClung Ranch in 1988 while he was still attending Rising Star High School. He continued working for the ranch while attending Tarleton State University where he earned a degree in Agri-Business. He married Caryl in 1992 and they have 4 kids - Aubrey, Matt, Caryn, and Colt. The kids have all been involved with Richardson McClung Ranch doing such things as feeding, cutting & baling hay, and AIing cattle. Howard and Caryl take care of the day to day operations and management needs of the ranch. They consider it a blessing to work together each day - doing what they enjoy.

The Lawrence's are active members of First Baptist Church, Rising Star. Howard has been on the Rising Star School Board for 20+ years. He serves on the Eastland County Livestock Raisers Association and the Eastland County Appraisal District Board. Their kids have all attended Rising Star ISD where they are active in sports, UIL, FFA, and 4H. Howard said "It is an honor to work for the Richardson McClung Ranch. We are blessed to be a part of the Richardson family."